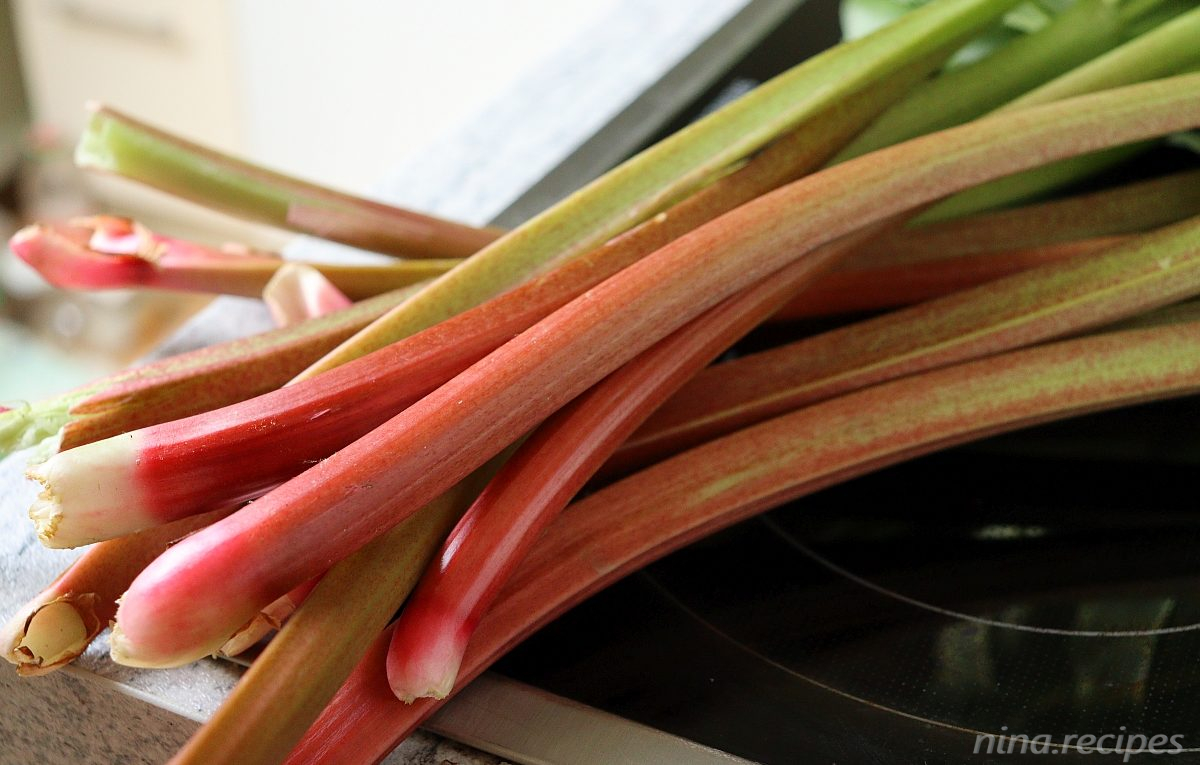 Rhubarb is a vegetable belonging to the Rheum genus, in the family Polygonaceae. The scientific name of the culinary Rhubarb is Rheum rhabarbarum. The plant is perennial which means that you plant it once and it comes back every year. Although it is a vegetable, thanks to its sour taste with a specific fragrance, Rhubarb is mostly used as a fruit.

Rhubarb has quite a distinct taste: it is sour but also a little sweet. It is one of those plants that people either love it or hate it. Although raw is quite tart, after cooking the taste tends to tone down. Don’t try to eat it raw: the taste is quite stingy. For me, Rhubarb is mostly sour but also aromatic, with a special taste. I would say that it is also savory. I find Fennel to be in the same category of plants with a special taste, although Rhubarb doesn’t have an aromatic anise taste like Fennel does.

Rhubarb leaves are toxic. They contain oxalic acid, a nephrotoxin (toxicity in the kidneys). This substance leads to kidney stones in humans if consumed in large quantities, for a long time. The rhubarb stalks are safe to use for cooking and baking. 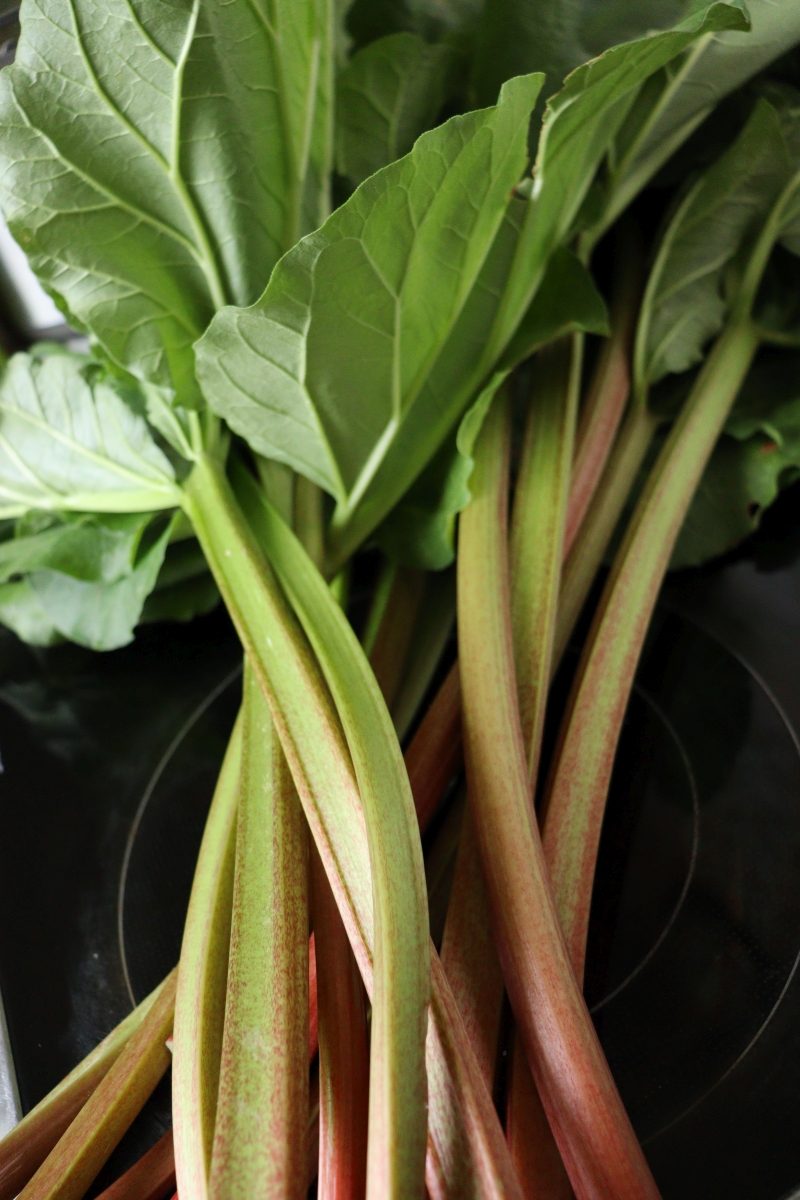 When is Rhubarb in season?

In Germany, Rhubarb is in season at the same time as Asparagus and Strawberries: from April until the 24th of June. After this date, the quantity of oxalic acid in the plant increases so it is recommended to reduce the consumption of rhubarb.

How to harvest Rhubarb?

If you have Rhubarb in your garden and you want to harvest some, do not cut the stalks! You would want to grab each stalk individually near the bottom and simply twist it. The stalk will nicely snap if the plant is ripe. You shouldn’t harvest all the leaves because the plant needs some to regenerate itself and prepare for the winter. In this way, you can enjoy every year the taste of Rhubarb. 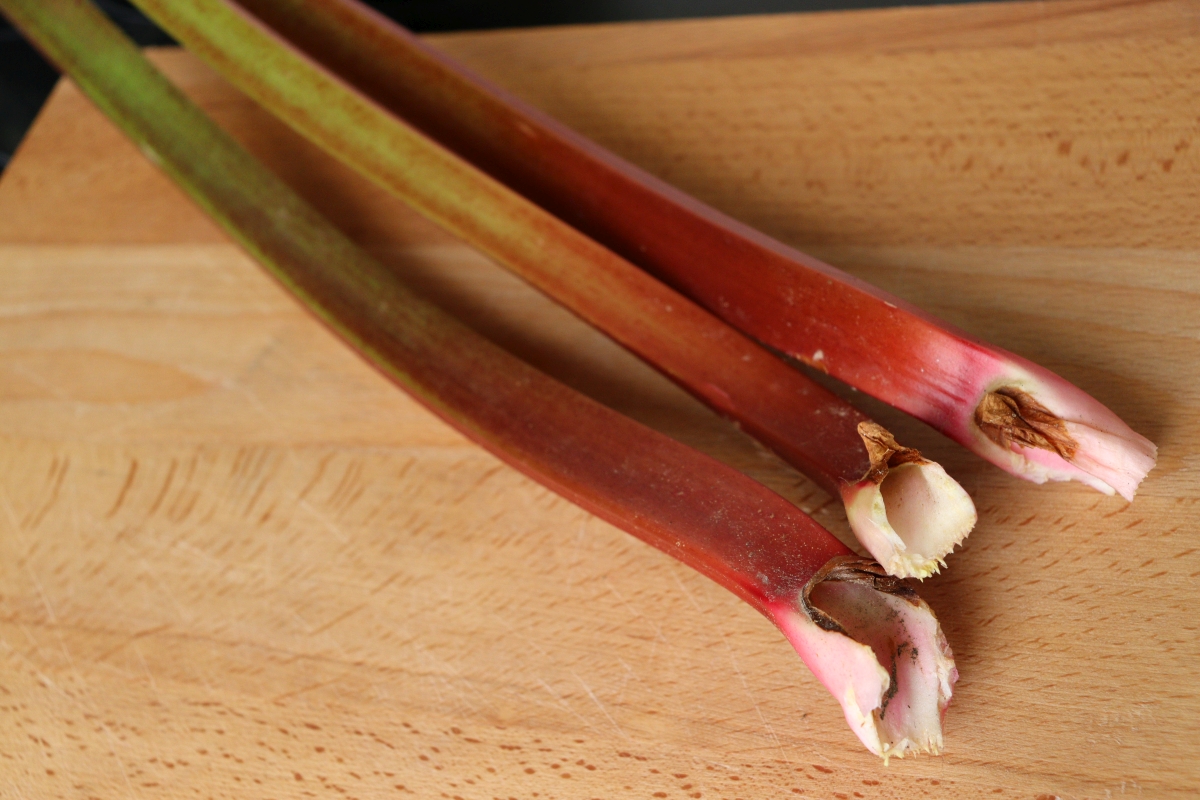 What to make with rhubarb?

Rhubarb is mostly used in crisps, crumbles, cakes but also for making rhubarb jam, jelly (fruit preserve), or juice. You can try out Oma’s Rhubarb Cake recipe for a traditional taste or you can replace half of the rhubarb with strawberries if you want more sweetness.
Because Strawberry and Rhubarb are in the season, it is common to mix them in pies and cakes. By doing so, the tart taste of Rhubarb is toned down by the Strawberries which also bring extra sweetness. You can make delicious Strawberry Rhubarb Bars or a Strawberry Rhubarb Pie, with crumb topping. Check out my Rhubarb recipes.

How much rhubarb for a pie?

When it comes to the amount of rhubarb in a pie or a cake, there isn’t really an iron rule. Mostly, it comes down to convenience and how rhubarb is available to which the own preference is added. I like to use 500 g of ready Rhubarb (peeled and cut) for a Ø 26 cm springform tin when only using Rhubarb in a cake. When mixing it with Strawberries, I usually use half Strawberries and half Rhubarb, again 500 g in total. Feel free to experiment and use the amount that best fits your taste.

Which rhubarb type should I use?

For Rhubarb pies, crumbles and cakes, you should use a red variety since with smaller stalks which also gives a nice color. 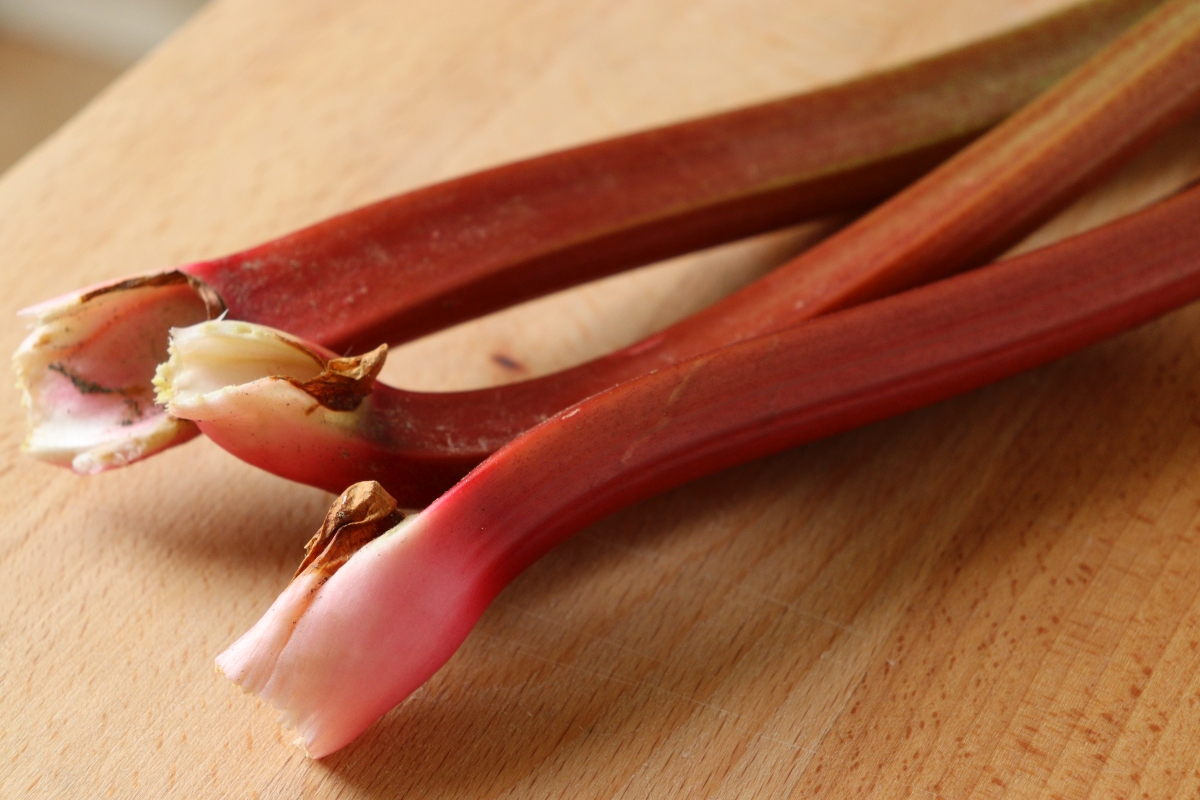 For rhubarb juice, jelly, or jam you should use varieties with bigger stalks, usually the green ones, which have more water content. 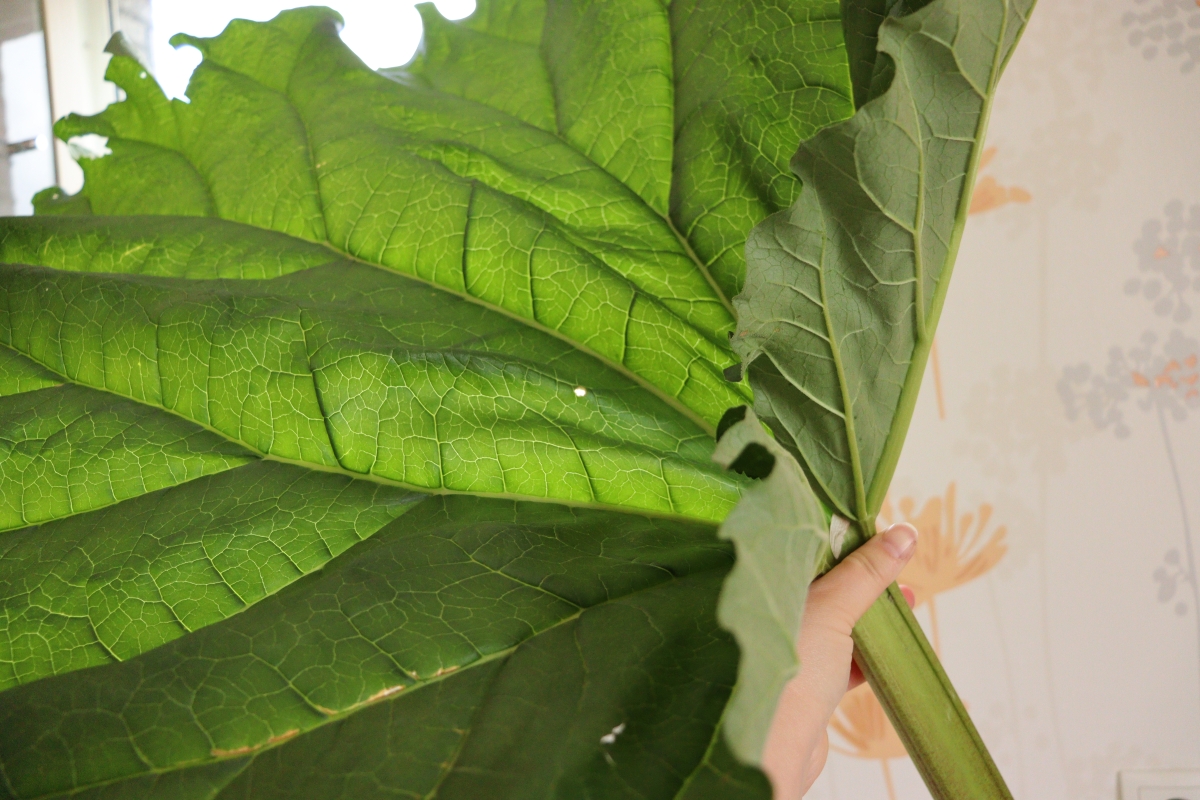 How to peel and cut Rhubarb?

Some people don’t recommend peeling the rhubarb while others strongly advocate for it. I believe it’s a matter of personal taste but it also depends on the type of rhubarb. The big green rhubarb stalks should be peeled because they have strings that may end up between your teeth. The small red ones, on the contrary, can be cut unpeeled.
In order to peel the rhubarb, use a paring knife and slip it under the skin of the plant, at the end of the stalk. Secure the skin with your thumb and pull it away, The strings should come off easily.
For pies and crumbles, you can cut the rhubarb in about 2 cm diagonal pieces.
You can use the peels to make a delicious Rhubarb Lemonade. 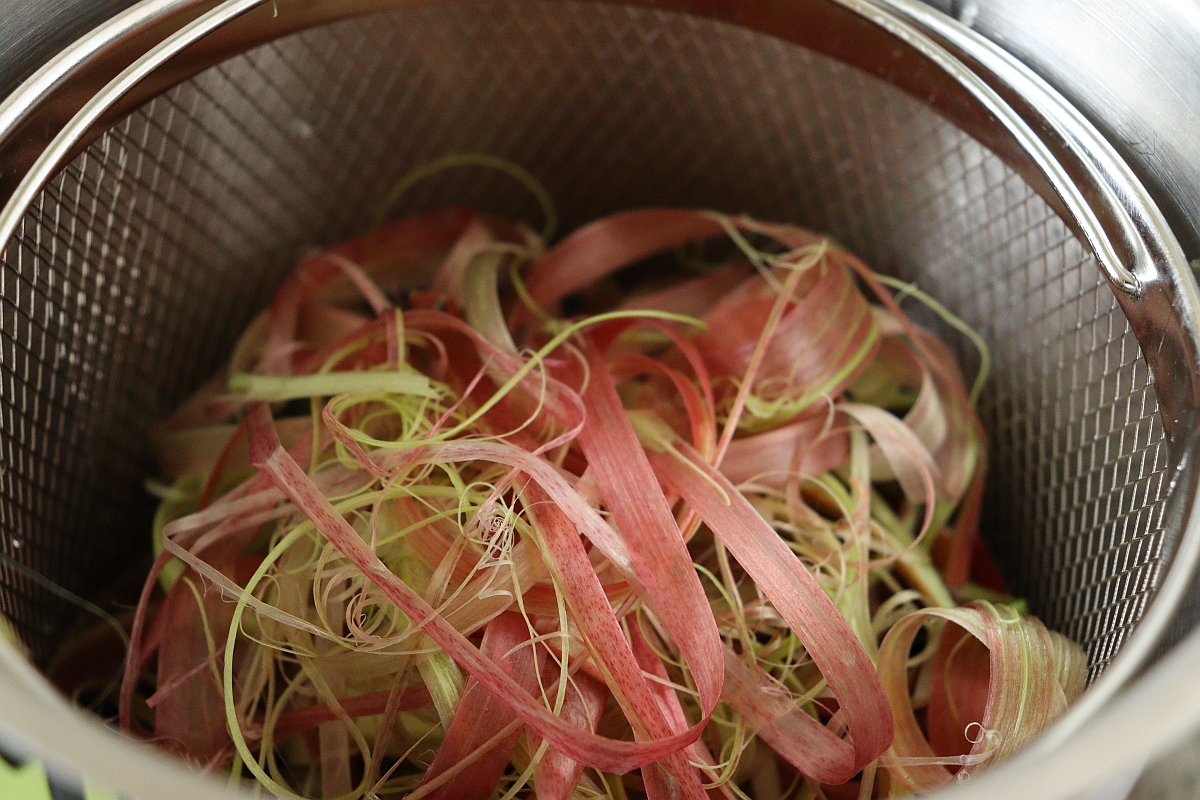